While women and men believe they are equally able to attain high-level leadership positions, men want that power more than women do, according to new research by Francesca Gino, Alison Wood Brooks, and Caroline Wilmuth.

by Carmen Nobel
New research from Harvard Business School reveals a stark gap in the professional ambitions of men and women.
Having surveyed a diverse sample of more than 4,000 men and women, a team of social scientists reports a list of potentially controversial findings:

Published this week in the Proceedings of the National Academy of Sciences, their study is entitled Compared to Men, Women View Professional Advancement as Equally Attainable, but Less Desirable.

“EVEN IN THE MOST PROGRESSIVE, GENDER-BALANCED HOUSEHOLDS, ON AVERAGE, WOMEN SEEM TO THINK ABOUT A GREATER DIVERSITY OF PURSUITS”

While you let that provocative title sink in, it’s worth noting that the research was conducted by three professionally ambitious women:Francesca Gino, a recently tenured professor in the Negotiations, Organizations & Markets (NOM) unit at HBS; Alison Wood Brooks, an assistant professor in the NOM unit; and Caroline Wilmuth, who is pursuing a doctorate in organizational behavior at Harvard. On the life side of the work/life balance, Brooks just returned to HBS from maternity leave in August. Gino is the mother of a spirited three-year-old son, and is expecting a second child.
In other words, these are the last people in the world who would try to thwart female ambition with scientific research. Still, when Gino presented the study at a conference a few weeks ago, the audience booed her.
“People were upset because they thought the paper suggested that we shouldn’t offer women positions of power,” Gino says. “And I want to make it clear that, no, that’s not what we’re saying at all.”
Rather, she says, the researchers simply want to raise the idea that women and men tend to view power differently, and have different preferences about professional advancement—and to delve into why.

The research began with the hypothesis that women have more life goals than men do, based partly on previous gender research and partly on personal experience and observation. 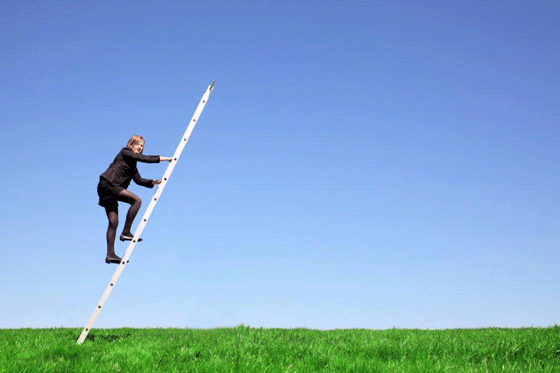 When asked to imagine receiving a promotion at work, women predicted
a higher level of negative outcomes than men did.©iPhoto

“We wondered if women may think about things that men don’t,” says Brooks. “You want to be an amazing employee. You want to be an excellent leader at work. But you may also want to dress well. And make sure your children are fed. And that the nanny got to the house in time for you to leave for work. And remember to check in with your close friends. And find time to jog three times a week. And so on. Even in the most progressive, gender-balanced households, on average, women seem to think about a greater diversity of pursuits.”
The researchers asked 781 working adults to fill out an online survey, listing their core goals in life. Indeed, on average, women listed nearly twice as many goals as men did. Among the goals that they listed, however, men reported a higher percentage of goals related to professional power.
Next, the team investigated whether women desired professional advancement less than men, due to having to juggle more goals. They recruited 635 men and women from the same professionally-ambitious demographic: the Harvard MBA classes of 2013 and 2014.
The participants considered a picture of an actual ladder, which represented the conceptual corporate ladder. Their task: to indicate their current position in their industry, their ideal position, and the highest position they could realistically attain.
In terms of their current positions, there were no significant differences between men and women among the newly-minted MBA grads. And men and women chose equally high rungs regarding how high they thought theycould climb on the corporate ladder, if they ever wanted to climb that high. But when it came to the ideal position, women chose a lower rung on the ladder than men did, on average.
“It’s not a matter of thinking that high-level positions are more or less attainable for these men and women,” Gino says. “It’s just that they have different preferences.”

THE CONSEQUENCES OF PROFESSIONAL ADVANCEMENT

The next logical step was to suss out why women (even women with Harvard MBA degrees) may desire professional advancement less than men do. So the researchers asked 465 working adults to imagine accepting a promotion at work, and to predict the extent to which they’d experience possible resultant outcomes. Some outcomes were positive (satisfaction, money, influence), while others were negative (stress, tough tradeoffs, conflict with other life goals). “The idea was to capture all the possible things that might happen to people in high power,” Gino explains.
Overall, both men and women predicted the same level of positive outcomes. Yet, women predicted a higher level of negative outcomes than men did.
The researchers yielded similar results when they repeated the exercise with 204 mid-career students in the Executive Education program at HBS—men and women who already occupied powerful positions at work, and who had taken the initiative to enroll in advanced leadership courses. Even among these women who were actively climbing the corporate ladder, there was a relatively larger negative association with power compared with their male counterparts.
And when the researchers surveyed 516 Harvard undergraduates, the results held steady. Asked to imagine receiving a high-power job opportunity upon graduation (a likely prospect for many of them), young women listed a higher proportion of negative outcomes than young men did.

In the conclusion of their study, the researchers note that their findings are “descriptive, not prescriptive.”
“Based on these data, we cannot make value judgments about whether men and women’s differing views of professional advancement are good or bad, rational or irrational, at any level of analysis (e.g. , for individuals, for organizations, or for societies),” they write.
But they hope to break new ground with the idea that even if the CEO suite is a viable option, it’s acceptable to pursue other goals instead.
“The findings in the paper could be construed as anti-feminist, but one could also argue that they represent true feminist ideals,” Brooks says. “It’s fascinating that women have more goals than men. At this point in Western culture, women are pursuing more things. It’s empowering to have a long list of goals, and to try to pursue them all. We hope our findings encourage men and women to be more aware of their own goals and preferences, and respectful of others’.”
In the next stage of the research, the team plans to find out the point in life at which men and women start developing differing views about professional advancement—or, rather, when boys and girls start developing differing views.
“We might have to go much younger than college undergraduates,” Brooks says. “Maybe even younger than high school.”

Carmen Nobel is the senior editor of HBS Working Knowledge.