How does your salary stack up compared to the opposite sex?

How does your salary stack up compared to the opposite sex?
RICHARD MEADOWS
Last updated 09:44, June 28 2015 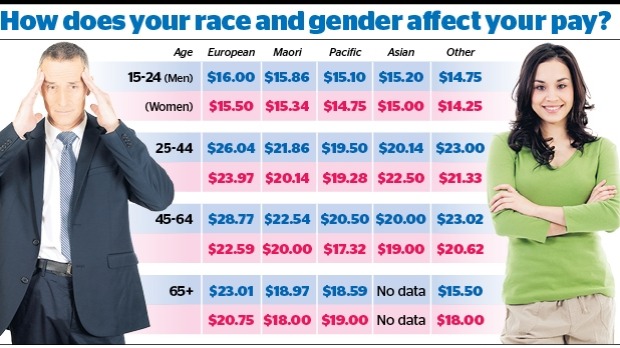 ROSS GIBLIN/FAIRFAX NZ
Kristine Bartlett’s landmark equal pay case will return to the Employment Court next year.
But regardless of age, men are consistently paid more than women, and Europeans more than other ethnic groups.
The fact that women made up two thirds of those still on the minimum wage after age 25 highlighted the fact that the “traditional” work they did was undervalued, Blue said.
She called on the Government to ensure equal pay for work of equal value by 2020, one of several recommendations aimed at levelling the playing field for women and minorities.First Union general secretary Robert Reid said the gender pay gap went further than most people realised.
For example, forklift drivers in a distribution centre could earn more than drivers in a supermarket owned by the same company.
“This is a hangover from the days of gendered work where distribution centres were male-dominated and supermarkets were considered womens’ work,” he said.
Reid said the gap between ethnic groups was not necessarily caused by overt discrimination, but historical forces at work.
Successive government had underinvested in Māori education, meaning access to higher-paying professions had been closed off to many.
“This leads to problems like intergenerational poverty, or entrapment in low-wage ghettos,” he said.
The report shows the unemployment rate for Māori and Pacific people is at least double that of European New Zealanders, with the gap even wider for those aged 25-44.
EQUAL PAY CRUSADER
Kristine Bartlett is tired.
The rest-home caregiver is holding down a full-time job while waging a legal battle which has huge implications for New Zealand workers.
When Bartlett decided to take action against her employer three years ago, she never imagined it would get this big.
She successfully argued her $14.46 hourly rate was less than would be paid to men for the same skills.
The landmark case is now returning to the Employment Court, which will set guiding principles for pay equity across the country.
Appeals are likely. In the meantime, Bartlett has been on the road listening to the stories of other rest-home workers.
“It’s been a real eye-opening experience,” she says. “All our stories are basically the same- so underpaid and undervalued. It’s disgusting.”
Bartlett says she loves her job -which she has been doing for 23 years- and wouldn’t trade it for the world.
Ad Feedback
“My concern is that if the pay’s going to stay low, what sort of carers are we going to end up getting? These old people need respect, love, compassion, empathy.”
Despite the demands of being thrust into the spotlight and the pressure that rides on her case, she says she would do it all over again.
“At the end of the day what I’m doing is for all women, and I’m proud of that.”
– Sunday Star Times